NEW DELHI: The rapidly rising COVID-19 load in India is not the only concern as the high mortality rate is also a cause of worry for health experts and epidemiologists.

Data released by the Union Ministry of Health and Family Welfare from time to time show that in a month, the death per million due to the Covid-19 in India has more than doubled, even though the infection fatalities in the country is among the lowest in the world.

Till Tuesday morning, India had registered a total of 36,91,166 confirmed coronavirus cases and 65,288 deaths, with the highest — 24,583 — deaths recorded in Maharashtra alone. The case fatality rate due to the disease is 1.8 per cent as of now.

There are eight states and Union Territories (UTs) whose death per million figures are much higher than the national average. In Delhi, the figure stands at the highest (220), closely followed by Maharashtra where death per million at present is 198.

“The rising death counts in several states are worrisome and it could also be because a more susceptible population maybe now coming out after the end of the nationwide lockdown most parts of the country and, in turn, getting exposed to the virus,” said Dr Anant Bhan, a researcher in global health and bioethics.

He added that mechanisms such as strong coordination between public and private hospitals, robust referral systems and close monitoring of infected people under home isolation were a must to keep the rising death per million under check.

Dr T Sundararaman, public health expert and former director of the National Health Systems Resource Centre, said it is a matter of grave concern that the pandemic is showing no sign of plateauing in the country yet and lack of adequate healthcare service may be resulting in even many preventable deaths.

“We are soon going to have the largest number of official tally of cases and may have the highest death toll globally by the time the pandemic ends,” he said.

Some experts, however, explained that death per million figure could only go up as the denominator-or the population-is almost fixed.

“In my view what needs to be watched closely is the case fatality rate and its variation across states,” said Dr Chandrakant Laharia, a New Delhi-based public health specialist. 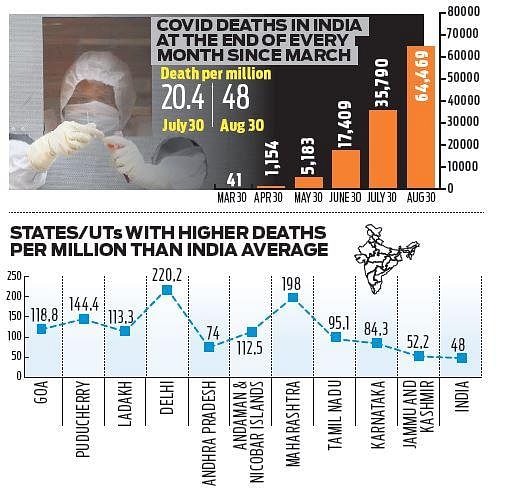