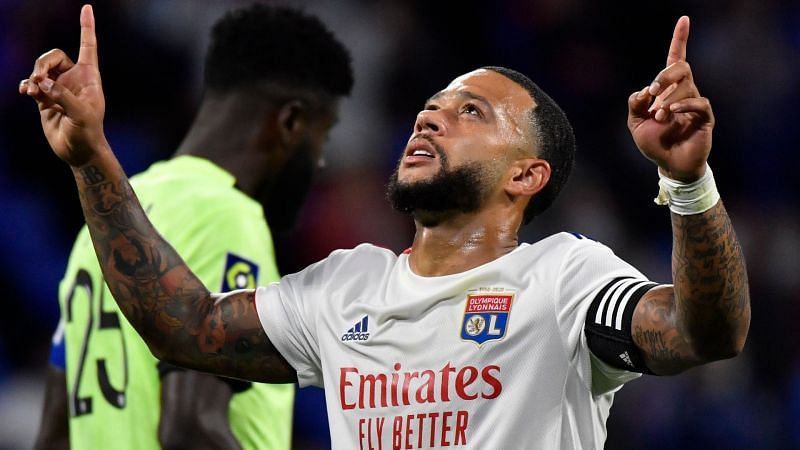 Lyon star Memphis Depay admitted he can only “dream of big clubs” amid links with a move to Barcelona.

Depay, 26, has been linked with a switch to the LaLiga giants, where his former Netherlands coach Ronald Koeman has taken over as boss.

The attacker scored a hat-trick as Lyon crushed Dijon 4-1 in their Ligue 1 opener on Friday.

Speaking afterwards, Depay said he was yet to speak to Koeman, but admitted he was dreaming of joining a big club, with Lionel Messi set to leave Barcelona.

“I’m actually focused here on Lyon. I’m glad that I’m back, I didn’t speak with Koeman yet,” he told a news conference.

“You know he’s been involved in my recovery, coming to Rome to see me, when I was training in Holland he came to see me so the relationship is good anyway.

“Now obviously he is coach of Barcelona, and me personally I’m focused on Lyon because I’m here right now. I can dream of big clubs and we will see what happens, but for the moment I’m a player here and I’m taking great responsibility I think.

“I must say the club gives me a lot of freedom and a lot of respect so I’m happy with that and I try to do my best to give everything back for the club.

With the 2019-20 Ligue 1 season cut short due to coronavirus, Lyon finished seventh, while they produced a fine run to the Champions League semi-finals.

“That’s what we’re aiming for, me and the team. That should be the ambition,” he said.

“We have shown that we can compete with them when we play against them, we can make it very difficult, obviously it was sad that we didn’t win the cup [Coupe de la Ligue] final, but it’s more than only those games.

“You have to win the smaller games as well and in the past we have seen that sometimes it doesn’t happen so we have to stay focused, take it game by game and ambition must be very, very high. We have a lot of good players, intelligent players, we try to do our best to compete. That’s why I came to Lyon.”

Women’s Bracketology – Brackets in all shapes and sizes