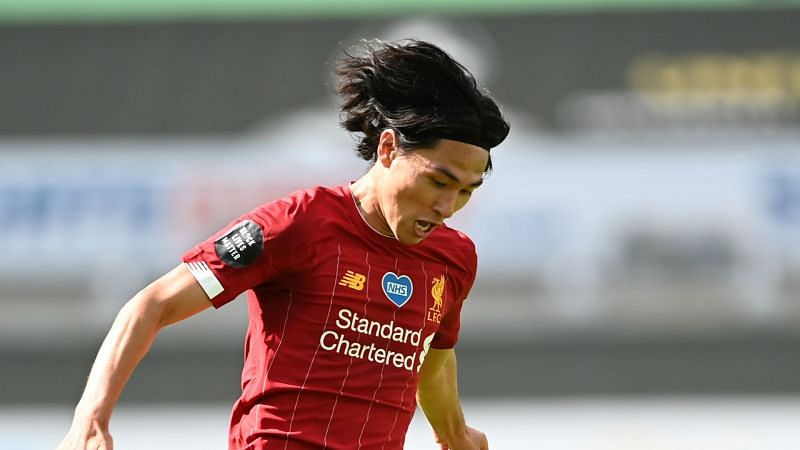 Jurgen Klopp is hopeful Takumi Minamino can carry his pre-season form into the new campaign after starring for Liverpool in their 7-2 friendly win over Blackpool.

The January signing from Salzburg netted in last week’s Community Shield defeat to Arsenal and was on target again at Bloomfield Road on Saturday.

Minamino started just behind Roberto Firmino in a 4-2-3-1 formation and set up the Brazilian for Liverpool’s third goal as they recovered from two goals down.

And Klopp is glad to see the Japan forward find his feet at Liverpool ahead of next week’s Premier League opener at home to Leeds United.

“I hope [he takes confidence from this],” Klopp told the club’s official website. “It’s clear that’s what you always hope for.

“It’s important for Taki and important for us, but it’s about all together, so I think about the overall performance. Individuals then can always shine when everything else works, that’s how it is.

“If you only have these individual glimpses here and there, it doesn’t really work out. So, we have to work to win football games.

“Who scores then is not too important. But for Taki, of course it was a rather nice seven or eight days – of course.”

Liverpool found themselves two goals down against the League One club with 33 minutes played and Klopp admitted he was not pleased with his side’s first-half display.

“It was because of a lack of aggression from our side, a lack of desire a little bit for this game – that’s how it is, playing around,” he said.

“The goals we conceded, yeah, that’s mistakes – it’s typical for pre-season games. But so far I think we conceded pretty much all the goals in similar situations; losing the ball in the build-up, then it’s a counter-attack, it’s a free chance pretty much.

“We know that and it’s clear we cannot do it like this. We have to improve that. But we have another week to get the legs fresher, again an intense week. We have to use the weeks, we cannot change that.

“I would love to have always fresh boys with super fresh legs in the games, but that only can work over the year when you do the hard work in the pre-season.

“That’s what we are doing. We scored a good goal after a nice set-piece in the first half, then all the rest was pretty much like it should be [in the second half] – much more aggressive and we could bring in other fresh legs. That helped obviously.”

Six of Liverpool’s goals came in the second half, with teenage winger Harvey Elliott among the goalscorers.

“It’s in his hands. I liked much more the offers he made today – he was really sharp, quick, he offered different runs to what he is usually doing,” Klopp said.

“That’s what we are all trying to figure out to bring it on the pitch – and that’s good, of course. It was very nice for him to score this goal today.”