The Realme Smart Cam 360 is the company’s first product in home security space. Launched during the IFA 2020 live stream event, the camera is said to support 1080p full-HD video recording with features like wide dynamic range and 3D noise cancellation algorithm to improve image quality. The smart camera has a mechanical gimbal that achieves 360-degree panoramic vision for better edge detection and eliminating a potential blind spot. It also has built-in edge distortion detection to capture the living space in a more human-like manner.

The Realme Smart Cam 360 has an infrared Night Vision Mode that is automatically enabled when the sun goes down. The camera has a 940nm infrared illuminator integrated inside. It comes with other features like AI motion detection, real-time alert, and two-way voice talk enabling remote calls. One of its unique features is the integrated cover that completely hides the lens for those who look for privacy at certain times.

The Realme Smart Cam 360 also supports up to 128GB of storage through a microSD card; however, the onboard storage size is unclear. Realme says recorded video can also be stored locally and accessed via Realme Link. AES/TLS 1.2 encryption algorithm is used for both storing and transmission of data. 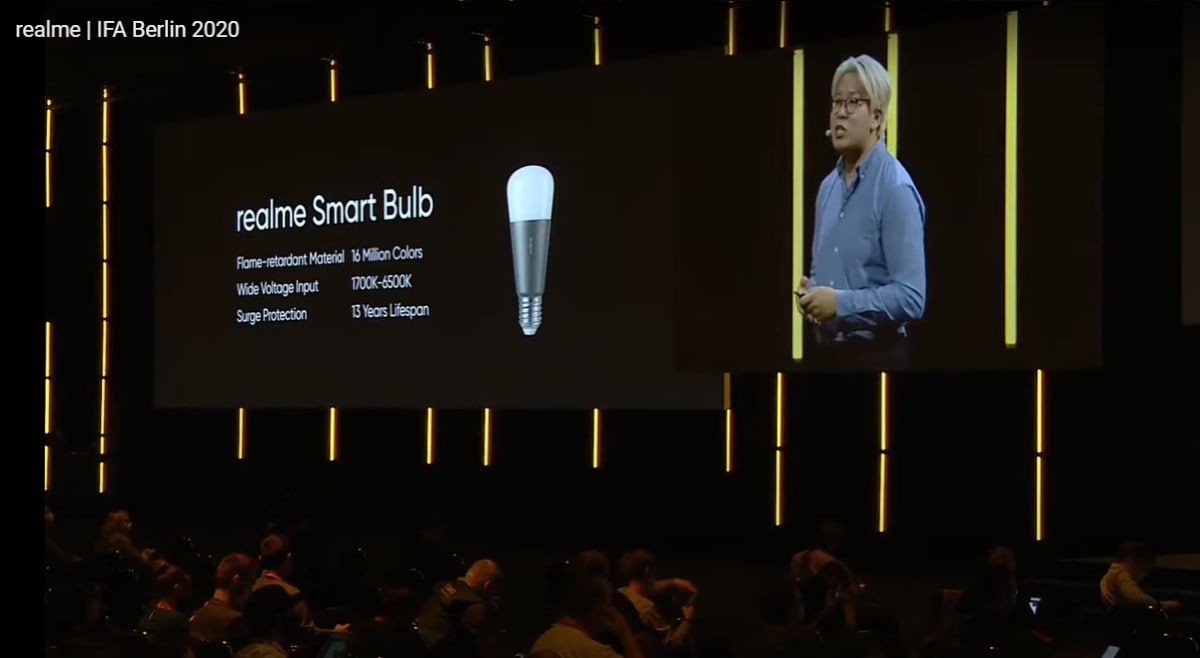 Realme Smart Bulb is touted to have 13 years of lifespan

Realme also introduced the Realme Smart Bulb at its IFA event. This new product supports 16 million colours, no-flickering light, and a wide range of colour temperatures (1700k-6500k) from cooler shades to warmer tones to set the mood. The bulb is made from flame-resistant material and is touted to have a lifespan of 13 years. It even supports voice command controls, offers surge protection, and has a wide voltage input.

Is Realme TV the best TV under Rs. 15,000 in India? We discussed this on Orbital, our weekly technology podcast, which you can subscribe to via Apple Podcasts or RSS, download the episode, or just hit the play button below.

Tasneem Akolawala
Tasneem Akolawala is a Senior Reporter for Gadgets 360. Her reporting expertise encompasses smartphones, wearables, apps, social media, and the overall tech industry. She reports out of Mumbai, and also writes about the ups and downs in the Indian telecom sector. Tasneem can be reached on Twitter at @MuteRiot, and leads, tips, and releases can be sent to tasneema@ndtv.com.
More

How some Black startup founders are finding it easier to attract investors in 2020, as investors are accessible on Zoom and creating diversity-focused funds (Christopher Mims/Wall Street Journal)

among us: Among Us on Android and iOS may get these new features