NEW DELHI: After a gap of five months, metro rail services will resume from September 7 in a graded manner, the Union Ministry of Home Affairs (MHA) announced on Saturday as it released the guidelines for Unlock 4, allowing many more activities to restart from September.

In a departure from previous lockdowns and unlocking phases, states will not be allowed to impose localised lockdowns in non-containment zones without consulting the central government, the MHA specified in the fresh guidelines.

The Ministry of Housing and Urban Affairs will also be issuing Standard Operating Procedure (SOP) for the operation of metro train services under Unlock 4, the MHA said. The Central Industrial Security Force (CISF) that guards the metro network in the national capital region has prepared a fresh “business continuity plan” that will be implemented in “consultation” with the urban development ministry and the Delhi Metro Rail Corporation (DMRC). 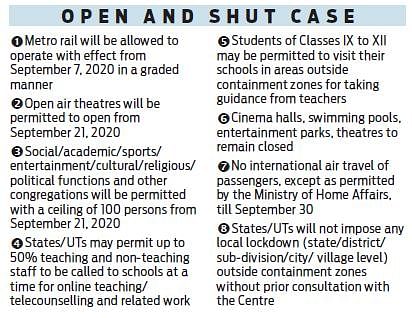 Measures proposed by CISF include contactless frisking of passengers, who will go through multiple door-sized metal detectors, checking them for fever or flu-like symptoms and restricted entry into stations

In Unlock 4, which will come into effect from September 1, the process of phased re-opening of activities has been extended further.

The Centre has also decided to allow social, academic, sports, entertainment, cultural, religious and political functions under this phase. These events will, however, be allowed only outside containment zones. Such public gatherings will be allowed from September 21 with a ceiling of 100 persons. At present, a maximum of 50 people are allowed for weddings and a gathering of 20 people is permitted for funerals.

“Such limited gatherings can be held with mandatory wearing of face masks, social distancing, provision for thermal scanning and hand wash or sanitizer,” the MHA guidelines for Unlock 4 state.

Schools, colleges, coaching centres and other educational institutions will remain shut till September 30, with some relaxations for students of classes 9 to 12 who may be permitted to visit their schools in areas outside the containment zones only on a voluntary basis for taking guidance from their teachers.

This will be subject to the written consent of their parents or guardians, according to the guidelines. The MHA said this decision was taken after extensive consultation with states and UTs.

In areas outside the containment zones, states and UTs may also permit up to 50% of teaching and non-teaching staff to be called to the schools at a time for online teaching/ tele-counselling and related work.

Is your dog your equal: SC asks man seeking equality for animal kingdom